On the rear wall of Ta' l-Ibrag church there is a marble plaque. Very few people pause to read it and fewer still fully appreciate the history behind it. This plaque commemorates the Blessing and Laying of the Foundation Stone of the church, which was to be dedicated to the Immaculate Conception by His Grace Archbishop Michael Gonzi on 7th May 1964. 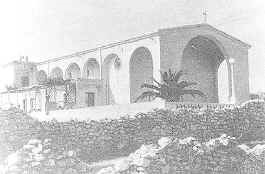 The church was built on land donated by the Aquilina family. It was situated in the limits of St. Helen's Parish, B'Kara, in an area known as St. Andrews. In those days only a few families lived in the area and the majority of these were farmers and manual labourers. These people worked hard for the church to be built and so that they could finally have their own chapel where they could participate in the  Eucharistic Liturgy and gather together in prayer. The building was completed within two years and His Excellency Bishop Emmanuel Galea blessed this new church and consecrated the marble altar on 13th February 1966. In the meantime, Vatican Council II had declared Our Lady as the Mother of the Church, and so it was dedicated to the Immaculate Mary Mother of the Church.

The first Rector of this church was the late Mgr. Stephen Borg. Fr. Stephen dedicated most of his time and energy to collect the necessary funds for this work of love. This was no easy task considering the limited resources available. However, not only did he manage to complete the church with plastering, woodworks, lighting, floor tiles, benches and other amenities, but he also commissioned the titular statue of Our Lady, which was to be the focal point of the church. The late Chev. Emvin Cremona was the artist who designed the splendid sculpture, which was carved out from a single block of wood by Vincent Moroder of Ortisei, Italy. A wooden tabernacle framed by four angels was also the work of Chev. Cremona. This tabernacle is now on the main alter.

Fr. Vincent Demicoli was the second Rector to serve in this church. It soon became obvious to Fr. Vincent that the Community was growing very rapidly as more people took up residence in this now sought-after area. It is interesting to note that during Fr. Vincent's tenure of office, the number of families grew from the original twenty to over one thousand families. 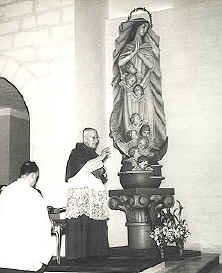 As the chapel could not accommodate so many people he started studying about how the church could be enlarged. Meanwhile, he began to collect funds towards this project. It was also during this period that the Way of the Cross was commissioned. Marco Cremona, Chev. Cremona's son, undertook the task of creating the beautiful fourteen Stations now adorning the Church.

Fr. Vincent also organised various social activities and the eager response of the community showed the importance of the church as a social centre.

Fr. Dennis Schembri was the next Rector. During his tenure of office the church was separated from St. Helen's parish, B'Kara and became an Autonomous Pastoral Zone. Fr. Dennis was given the brief to construct a Parish Church in the centre of nearby Pembroke which meant that the Ta' l-Ibrag church would remain a chapel. This decision was a disappointment to the local community who wished the Parish Church to be the heart of the area. Fr. Dennis moved to Turin, Italy after three years.

His successor was Fr. George Dalli. The Pembroke project was shelved and the original idea of enlarging the present church was revived. The land adjacent to the church was obtained by exchanging it for other Church-owned land. A house that would serve as the Rector's residence was also acquired. The extension of the church and the building of a Pastoral Centre that would cater for all spiritual needs of the community was no longer a dream. It was becoming a reality. 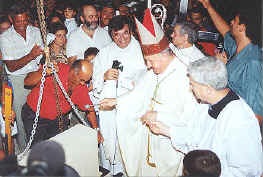 In just under one year the excavation work was completed and three large halls and Catechism rooms were built. On 2nd September 1994 the foundation stone for the church extension was laid and blessed by His Grace Archbishop Joseph Mercieca. Within a year the building was completed and on Christmas Eve 1995 the Evening Vigil Mass was celebrated in the new church. The Architect of the project was Mr. Roger Degiorgio A & CE - the same architect of the original Chapel. The time and effort he dedicated to this project with much love is greatly appreciated.

Fr. George not only undertook the task of seeing to the building of the church, but he also embarked on building a very active community with many lay people involved in providing a service to the community. Various groups were formed and a pastoral structure was created whereby every sector of the community was catered for. It soon became obvious that every single room in the multi-storeyed Pastoral Centre would be put to use. Now it was truly a church made up of people and not just built out of stone.

Today the parish of Ibrag, has an area population of more than 12000 people, and it comprises Swieqi,Tal-Ibrag, Upper Gardens, High Ridge, Victoria Gardens and Madliena.